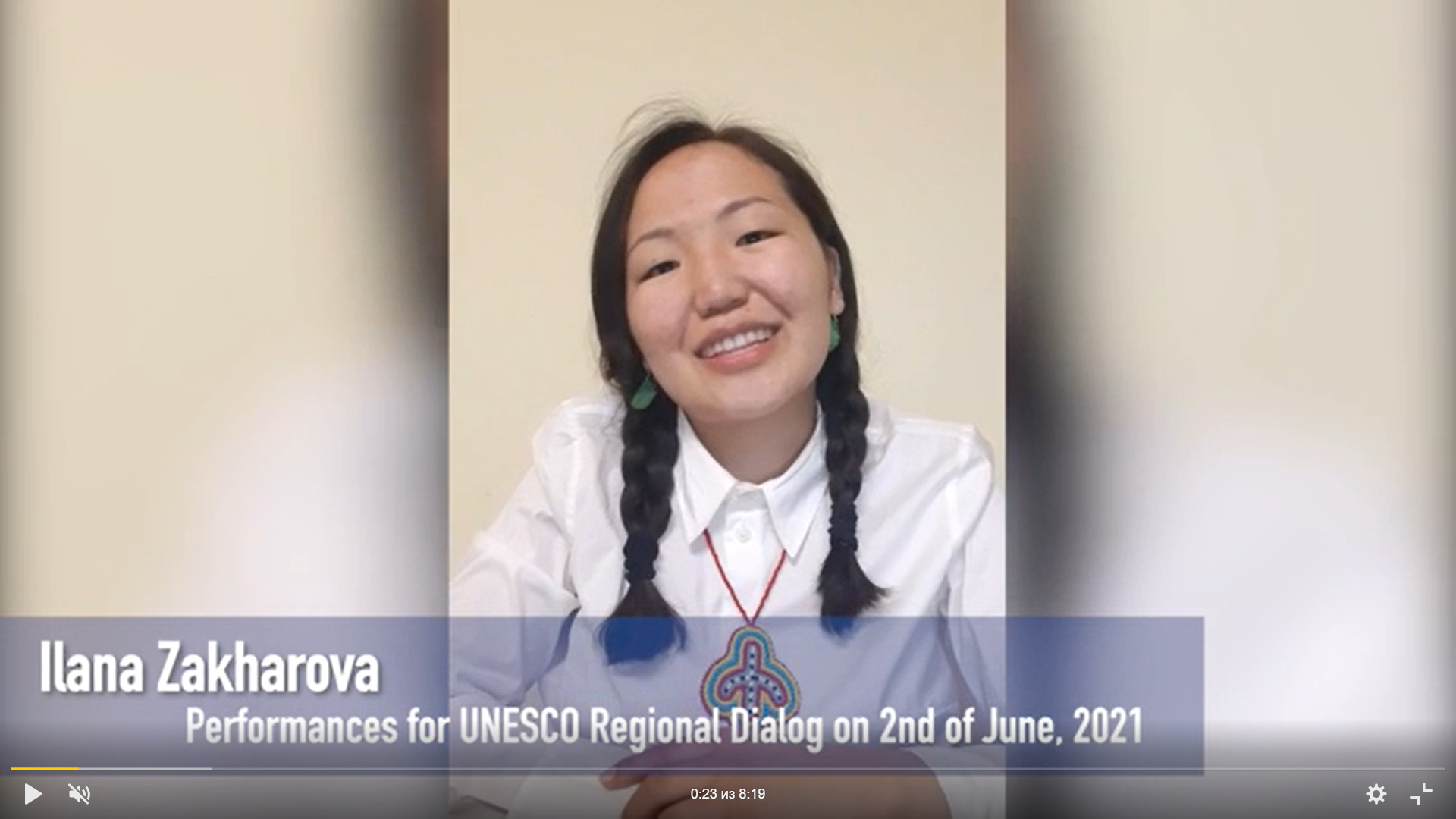 On behalf of youth associations of indigenous people, representatives of the youth bureau of the Council of Indigenous Minorities of the North, Ilana Zakharova from Yakutia and Daria Lykova from Krasnoyarsk, took part in the forum.

Ilana Zakharova told the representatives of various states and people who participated in the meeting about the situation with the preservation of the native languages of the indigenous peoples of the Russian Far East:

«Good afternoon. My name is Ilana Zakharova. I am an Evenki, originally from the Arctic. We live near the Pole of Cold Earth.»

The International Decade is a long-term global campaign, designed for the participation of not only all institutions of society, but also young people. After all, the motivation of young people to preserve their native languages is the main goal of the decade. If we do not interest young people, then there will be no one to transfer knowledge to.

The experience of holding the International Year of Indigenous Languages in 2019 confirmed the need for partnership between indigenous peoples, various civil society institutions, an alliance of the scientific community and teachers, as well as the involvement of industrial companies in this process.

I am the head of the youth bureau of the Council of the Community of Indigenous people of the North. Therefore, I can say that there are many youth non-governmental organizations in the Arctic that are trying to help preserve the cultures of minorities people. But there are not enough platforms for youth dialogue. We in Russia have something to share with the youth of other countries. And we ourselves are open to everything new. Moreover, the Internet provides previously unprecedented opportunities for the creation of extraterritorial linguistic communities, whose members can distribute texts in any languages ​​and make them the property of all mankind.

Anyone wishing to study a particular language can find its native speaker with the help of the Internet, with which he can virtually communicate, gain access to various textbooks, audio and video courses.

Of the specific examples of the use of modern technologies, I will name the creation of watsapp chats by representatives of the northernmost Turkic people — the Dolgans for sending audio and video files in their own language. My colleague in the Organization, Nasu Terebikhina, runs such a popular chat at the reindeer herding community in Taimyr.

Another example is the creation of board games in the Evenk language. The young scientist Karina Mishchenkova has developed 14 variants of the game for each of the dialects of the Evenk and Even languages, which contain a huge stock of words and expressions. The first games for smartphones in the Yukaghir language were recently prepared.

Everyone who is busy with the languages ​​of the peoples of the Arctic knows that all our languages ​​have survived only as professional slang for reindeer herders, hunters and fishermen. If our crafts are taken away from us, then languages ​​will not survive, as has already happened with many peoples of the American continent and Eurasia. There is one very important achievement in Russia — state support for traditional forms of management. Fishing, the use of traditional terminology makes it possible to preserve the language. A month ago, the Russian Government adopted a program to support the traditional activities of indigenous peoples, which made the development of crafts, and therefore cultures, even more sustainable.

For synergy, it is also important to combine the forces of the scientific community, educational practitioners and language activists. In order to solve the problem of preserving languages, mutual feeding, scientifically grounded methodology and practical application, as well as the active involvement of native speakers are necessary. So, for example, in the near future new textbooks of the Sami and Aleutian languages, as well as literary reading in the Sami language, prepared by the native speakers of these languages ​​using new technology, were prepared for the examination — the state fund did not purchase ready-made textbooks, but paid for the authors’ time so that they could get distracted from other works and create modern educational literature.

The introduction of educational models such as the Nomadic School and Nomadic Kindergarten, which allow children to be educated without leaving their families and from nomadic technologies, are encouraging more and more young indigenous people in the Russian Arctic to choose the traditional way of life of their ancestors. An Association of native language teachers has even been created in Russia, who are actively developing technologies of “nomadic education”.

Today, representatives of over 20 indigenous people live in the Russian Arctic. Despite the pandemic, for 2020 and early 2021. several dozen language festivals and traveling language camps were held in online and offline formats. We are ready to share our methods and new technologies with our European and American colleagues. Here is my colleague from the youth movement of indigenous people Daria Lykova, she could, with the permission of the distinguished chairman, add a few words about the digital development of the indigenous peoples of Northern Europe and North America.

Thank you for the attention … Daria Lykova from the Krasnoyarsk Territory also took part in the meeting: I would like to add to the message of Ilana Zakharova that not only technologies for preserving languages ​​are important for the youth of the Arctic, but also the development of high-quality Internet connections in remote villages, in the tundra and on the islands. We in Russia today actively participate in programs to eliminate the digital divide. After all, modern children should not grow up without the Internet, this dooms them to the fate of pariahs in the 21st century. This also applies to Europe and America. The other day I turned to Elon Musk on my blog, because my friends — young Gwich’in and Inuit in North America today do not always have an accessible Internet. But, suggested by Elon Musk, they can’t afford the connection either. I suggested that Mr. Musk reach an agreement with the leadership of the United States and Canada to compensate the Inuit and Gwich’ins for the costs of connecting to his network. This will be a real contribution to the preservation of their languages.